Please pray for the repose of the soul of Sister Marguerite Gregoire, a native of Lewiston and member of the Sisters of the Presentation of Mary, who died on January 16, 2023, at the age of 75.

Sister Marguerite was a religious for 53 years and taught in various elementary and high schools in Maine and Massachusetts as well as serving as a pastoral associate in both states.

In 2007, she entered the infirmary in Methuen, Mass., and eventually was moved to St. Joseph Residence in Manchester, N.H.

She was a kind and generous person and had a special love and devotion to caring for the poor.

Please pray for the response of her soul and the consolation of her family, many friends, and most especially her religious sisters. May her soul and the soul of all the faithful departed rest in peace.  Amen 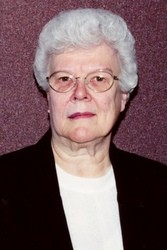 Your prayers are requested for the repose of the soul of Sister Claire Labbee, a member of the Sisters of St. Joseph of Lyon, who died peacefully on January 20, 2023, after a brief illness.

Sister Claire was a Maine native, born in Jay in 1934 to Donat and Emelda Samson Labbee. She attended St. Rose of Lima School in Jay and the Academy of St. Joseph in South Berwick, then earned a BA in math and science from LaMennais College in Alfred and a master's degree in education from Boston College.

Sister Claire taught at Holy Family School in Lewiston, Sacred Heart School in Auburn, the Academy of St. Joseph in South Berwick, and Mount Merici School in Waterville. She then served as religious education coordinator at St. Louis Parish in Auburn.

In 1977, she became provincial superior for the Maine province serving in this post for 10 years. She would later serve on the provincial team in the 1990s and again in the 2000s. Her next career was in pastoral care, first at St. Mary’s Hospital in Lewiston and then at Mount St. Joseph in Waterville, where she founded the Misson and Pastoral Care Department. Sister Claire also served on diocesan boards and committees.

Sister Claire is fondly remembered by all who knew her. She was kind, patient, a good listener, and cared for all those who crossed her path. Committed to the Church and her community, she engaged fully in whatever was asked of her.

Please kept in your prayers as well those she leaves behind, family, friends, and most especially the Sisters of St. Joseph of Lyon.

May her soul and the souls of all the faithful departed rest in peace.  Amen! 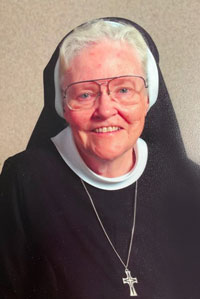 Please pray for the repose of the soul of Sister Eunice Boyd a member of the Sisters of Mercy of the Americas, who died on Friday, December 3, 2022, at the age of 92.

In 1970, she joined the faculty at Saint Joseph's College of Maine, the start of a long career in the college's science department.

In 1979, she took a sabbatical, traveling to Nairobi, Kenya, where she was a visiting researcher at the prestigious International Louis Leakey Memorial Institute.

Sister Eunice's students thought she was a very good teacher, and she made her classes interesting by sharing with them her travels in Kenya, Egypt, Germany, Italy, and France.

She was especially proud of her Irish heritage and treasured the memories of her time in Ireland.

Please keep in mind those she leaves behind, family, religious community and friends.

Sister Eunice was laid to rest at Calvary Cemetery in South Portland. May her soul and the soul of all the faithful departed rest in peace. 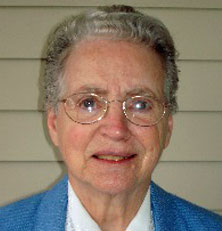 Your prayers are requested for the repose of the soul of Sr. Laurianne Michaud, OSU, also known as Sister Elizabeth Therese, who died on October 11, 2022, at the youthful age of 97. At the time of her death, Sister Laurianne was living in Waterville.

Sister was a professed member of the Ursuline Sisters for 75 years. The daughter of Joseph Michaud and Mary Ann Desilets, she was born August 7, 1925, in Lewiston, She entered the Ursuline community in 1944 and professed her vows on January 16, 1947.

During her long career, she taught almost every grade from kindergarten to 12 and served many years as a principal. She served in parish schools staffed by the Ursuline Sisters in Waterville, Brunswick, Sanford, and Lewiston. She also served at her communities' schools in Massachusetts and New York.

Sister Laurianne also held many positions in the community, including as prioress and province counselor.

One could always count on Sr. Laurianne if anything had to be done. She loved her sisters in community, her students, and her family. A woman of prayer, she sought to bring people together and help them to the many changes she experienced in her lifetime.

Please remember in your prayers the loved one Sister leaves behind, her natural family, her religious family and her many friends and acquaintances.

May her soul and the soul of all the faithful departed rest in peace. 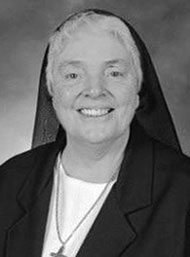 Your prayers are requested for the repose of the soul of Sr. Madeleine Normand, PM, a member of the Sisters of the Presentation of Mary who died October 25, 2022, at St. Joseph Convent in Biddeford. Sister was 83 years old and had been a religious since 1959.

Sr. Madeleine taught for many years, mostly at the grammar school level in Rhode Island. In the early 1990s, she completed clinical pastoral education, which led to 20 years of service as a chaplain at St. Mary's Hospital and St. Mary's d'Youville Pavilion in Lewiston. She was a gifted listener and loved the patients she assisted.

She also worked passionately at raising money to serve the poor in Haiti.

Sister Madeleine was buried at St. Joseph Cemetery in Biddeford.