A golden opportunity to gather and celebrate 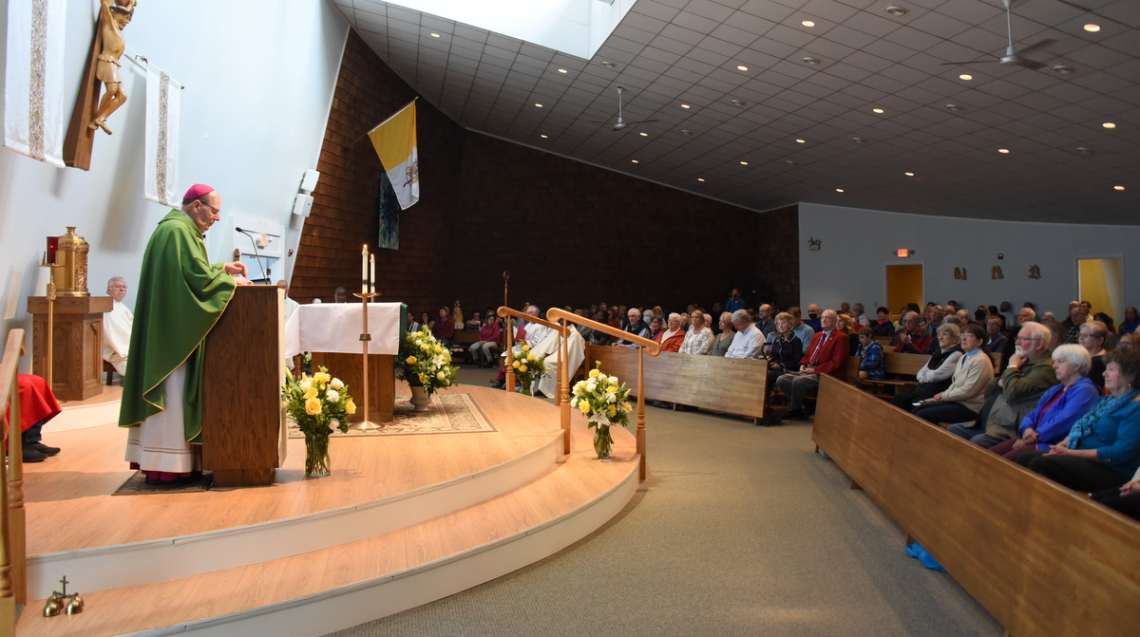 Warm and friendly. Those are the words parishioners use to describe the community at St. Anne Church in Gorham.

“I just love St. Anne’s Church. The people in it are so wonderful,” says Christine Kimball, who’s been a parishioner for decades.

“We really enjoy being welcoming,” says Dulcie Flaherty, a parishioner for the past 37 years. “We have become a very vibrant, active community.”

The vibrancy of the community is something evidenced in the church’s many committees, groups, and activities. Parishioners are currently preparing for the Christmas fair and Advent by Candlelight. From spring to early fall, there are monthly Rosary rallies. There is also a That Man is You group, an active Knights of Columbus council, a prayer shawl ministry, a crafters group, the Son-Shine Ministry to uplift parishioners through cards or visits, and a recently formed Stephen Ministry, intended as a support system among parishioners.

“I think it’s important for parishioners to be active in the parish, so the parish grows. There is no other way you can do it,” says Jim Vollkommer, who has been a parishioner for 51 years.

“We just think the Church is God’s expression of love on earth, and that’s what we need to do. We need to be involved,” says Mike Kennedy, a parishioner for 35 years.

Involvement by parishioners is not new to this community. It goes back to the days before the church was even built, something that Bishop Robert Deeley noted during a Mass on October 2 celebrating St. Anne Church’s 50th anniversary.

“The history of the parish tells us that, in 1967, ‘A hardworking Parish Council, Building Committee, and Furnishings Committee held countless meetings.’ What strikes me about this is the fact that such committees were so quickly established so soon after the end of the Second Vatican Council in 1965. The laity were, indeed, involved in the planning and construction of this space that we celebrate today on its 50th anniversary. And it appears to me that the laity are still a vital and important part of every part of the life of this community,” the bishop said in his homily.

St. Anne Church was dedicated on April 9, 1972, by Bishop Peter Gerety. The church’s roots, however, go back decades before that. The first Mass in Gorham was celebrated in the Grange Hall in 1944. Masses then moved to the town hall and eventually to a local theater, which was owned by a parishioner of St. Mary Parish in Westbrook, of which the Gorham parishioners were then a part.

“It was called the Playhouse Theater, and it would be transformed on Sundays into a church,” says Carolyn. “We had all our catechism classes there and everything. Everything was right at the little theater. It was pretty interesting when I think back on it.”

The community continued to increase in size and soon outgrew the theater, which seated about 300.

“Eventually, they had so many parishioners that they decided they had to build a church, but they didn’t have the money, so they got the land and built their foundation,” explains Dulcie, chair of St. Anne’s 50th Anniversary Committee.

Once the basement was finished, Mass was celebrated there, while fundraising continued to complete the rest of the church. Parishioners who remember those days say it was a time of coming together. Jim, now age 90, remembers attending Midnight Mass in the basement the year before the church was finished.

“The water was dripping through the ceiling but being caught in plastic that was hanging under the ceiling. It was quite an experience, but my mother said it was the nicest Midnight Mass she ever attended,” he recalls. “There was this special closeness that we experienced that particular night.”

Although there was not yet a church building, the community was established as a separate parish in 1967 and named for St. Anne, who, according to tradition, was Mary’s mother. In his homily during the anniversary Mass, the bishop said it is a beautiful title because St. Anne connects us to the heart of our faith.

“She shows us the human origin of Jesus, Son of God, Son of Man. In His incarnation, the joining of His divinity with humanity, Jesus revealed to us the depth of the Father’s love for us. Our worship in this place, dedicated to the memory of His grandmother, reminds us of that gift that is ours in our faith. And it reminds us that, whenever we gather to celebrate the Eucharist, Jesus is truly present with us. It is that regular celebration of the Eucharist that is the most important thing the community can do. Jesus’ presence to us in the Eucharist is our food for the journey of life,” the bishop said.

The community would worship in the church basement for seven years until the new church was finally ready. Carolyn remembers attending the dedication Mass when she was a teenager.

“It was very amazing, just that it was fulfilled, and we had our church now,” she says. “It was totally different from going to our little theater. We had a little chapel. We could go to pray whenever we wanted to. All of our CCD was there. It was great.”

The new church was described in the dedication Mass booklet as “simple and economical in a contemporary style.”

“This was built with the idea that the pews were all kind of in a semicircle around the altar so that nobody was too far away from the altar, and it had shingles on the inside of the building as well as the outside. They thought that would look nice, so that was kind of different,” says Christine.

Mike and Donna Kennedy, who raised six children, remember often spending time at the church because it was so family oriented.

“Some of the projects we did with the kids were things like Advent wreaths. We had pretzel baking one year, and Jesse Trees, and stuff like that,” Mike says. “I’ve got a black and white photo somewhere of the kids doing a sack race.”

Along with dedicated parishioners, Dulcie says the parish has benefited from having many wonderful priests serving there through the years. She points especially to Father Joseph Koury, who served as administrator beginning in 2010. Dulcie says he helped St. Anne Parish move forward by identifying priorities and forming a leadership team.

Dulcie was part of that team, which led her to become a member of the Hospitality Committee, one of the many committees on which she has served. She says while there was a time when she wasn’t actively engaged in parish life, her priorities shifted after being diagnosed with a brain tumor in 2000.

“I had an epiphany where I saw myself in God’s hands. He was holding me in His hands, and He said to me, ‘You are going to be OK,’” she says. “From that point on, I felt like God had a purpose for me, and that is when I started getting involved at St. Anne’s, and I’ve never stopped.”

Her service has included transforming the landscaping in front of the church, with the support of fellow parishioner Martha Muldoon.

“We had a very generous parishioner who donated significant funds several years in a row which allowed me to plan the landscaping out front, purchase the trees and the shrubs and add perennials. It’s come so far. It’s wonderful,” says Dulcie.

Also now enhancing the front of the church is a pathway leading to a statue of St. Anne, which parishioners gave to the church as a golden anniversary gift. The statue, which was crafted in Italy and depicts St. Anne teaching Mary, was blessed by the bishop following the anniversary Mass.

“It’s so beautiful,” says Jim. “It’s important to show her identity outside the church. The whole idea behind the gift for the anniversary is that we’re showing that St. Anne is an important person for us.”

The Mass, statue blessing, and luncheon that followed provided an opportunity for parishioners to both reflect on the gifts they have received from their church community and to look toward the future. Due to a merger last year, St. Anne is now part of the larger St. Anthony of Padua Parish, which also includes churches in Westbrook and Windham.

“What I really appreciated about the 50th Anniversary Mass and celebration was that it brought together founding members of St. Anne Church, who are now in their 90s, along with new parish families with young children. It made me more aware of God’s many blessings upon our Gorham Catholic community these past 50 years, along with a renewed hope for future growth of our parish. The founding members of our St. Anne community are responsible for the legacy of faith that they have shared with subsequent generations and that continues to sustain and nourish our church family,” says Father Louis Phillips, pastor.

“It’s definitely a pleasure for me to be able to be here for the 50th anniversary, because it’s a connection from my past,” says Carolyn. “It’s definitely a sign that my faith is still alive and well. It’s a wonderful feeling.” 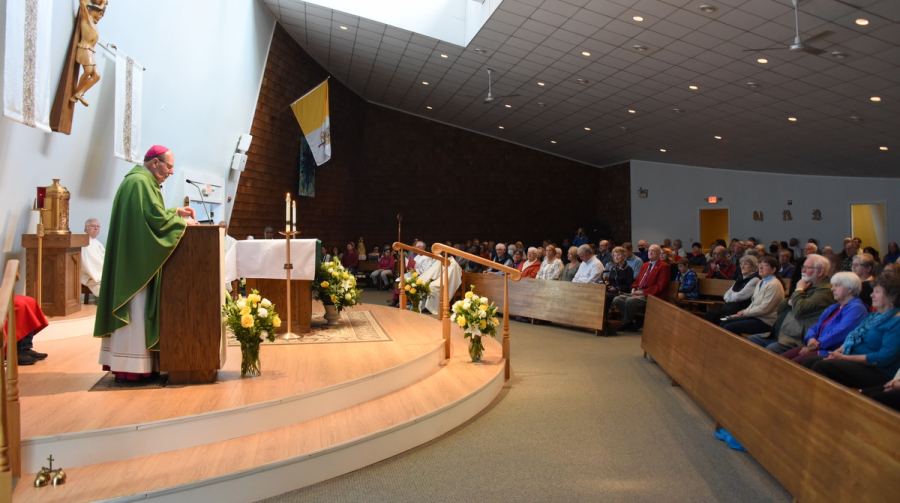 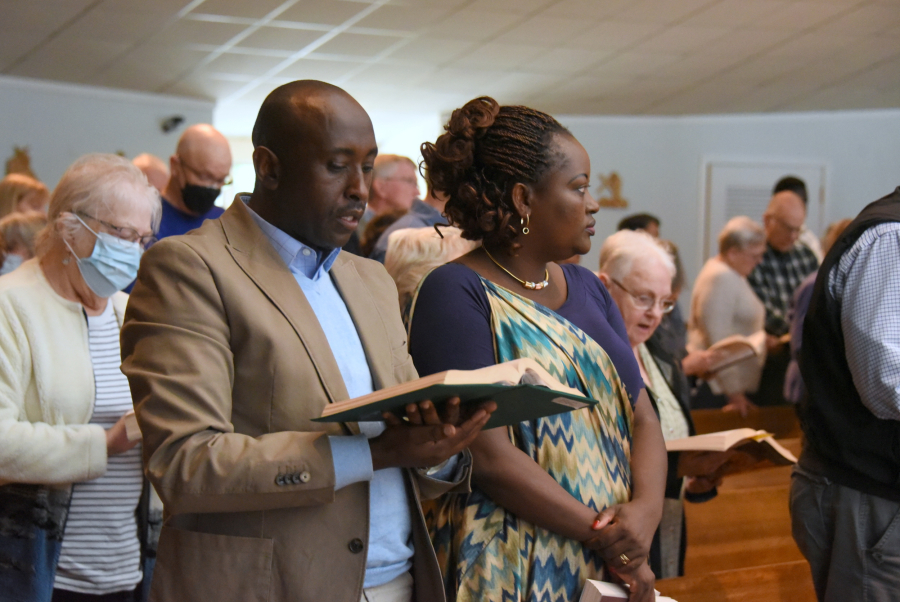 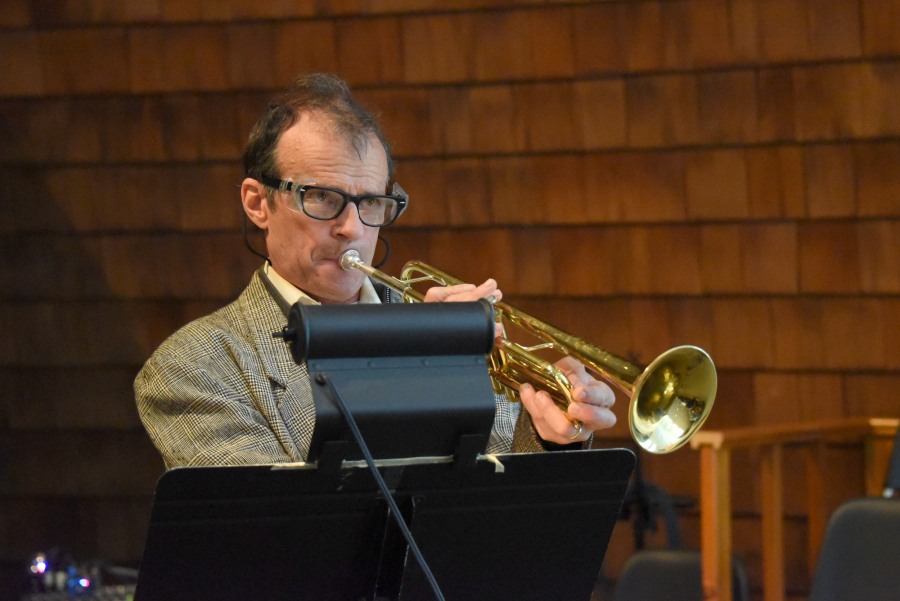 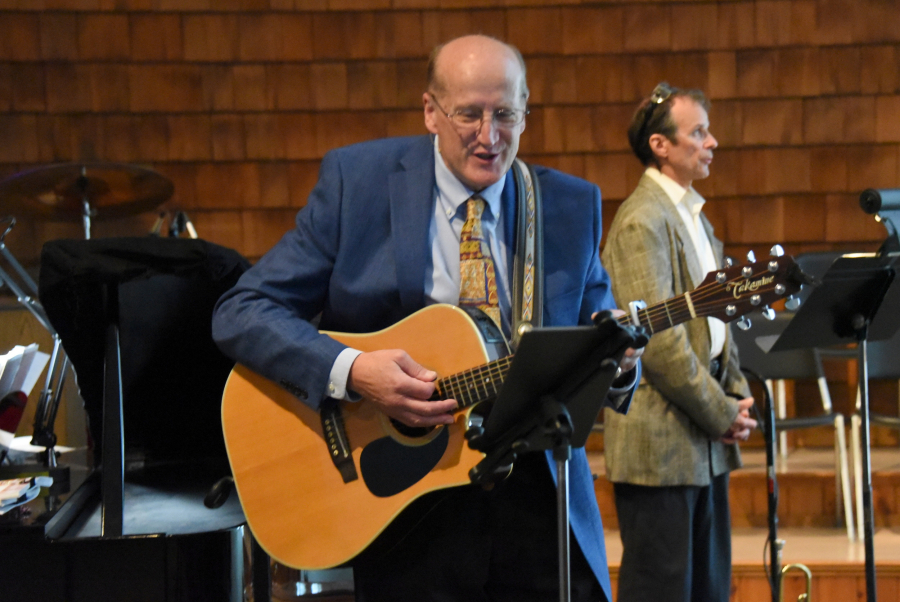 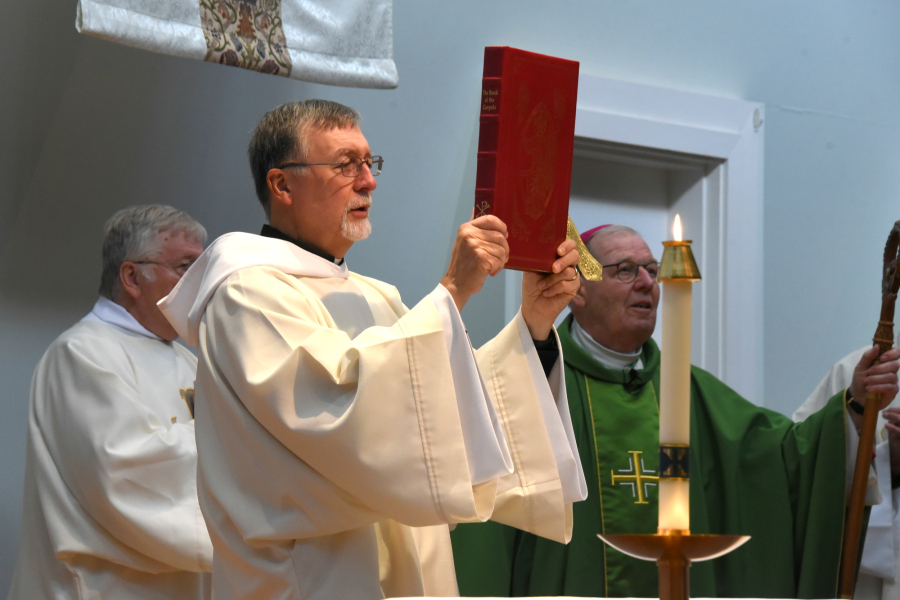 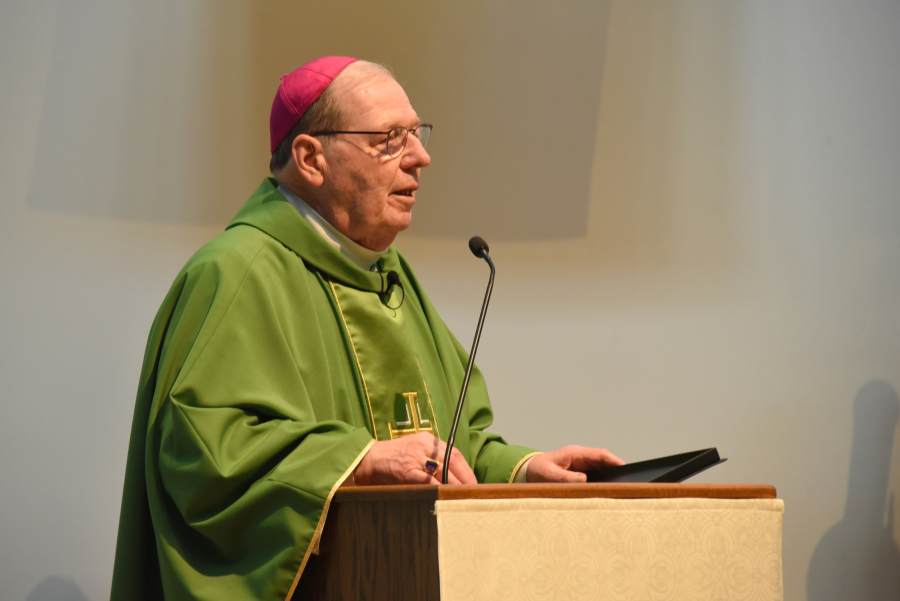 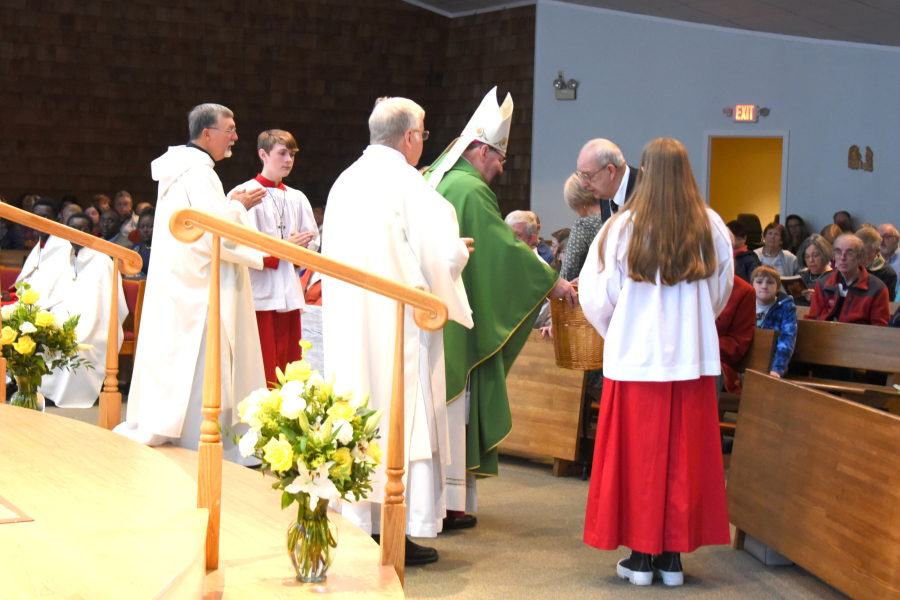 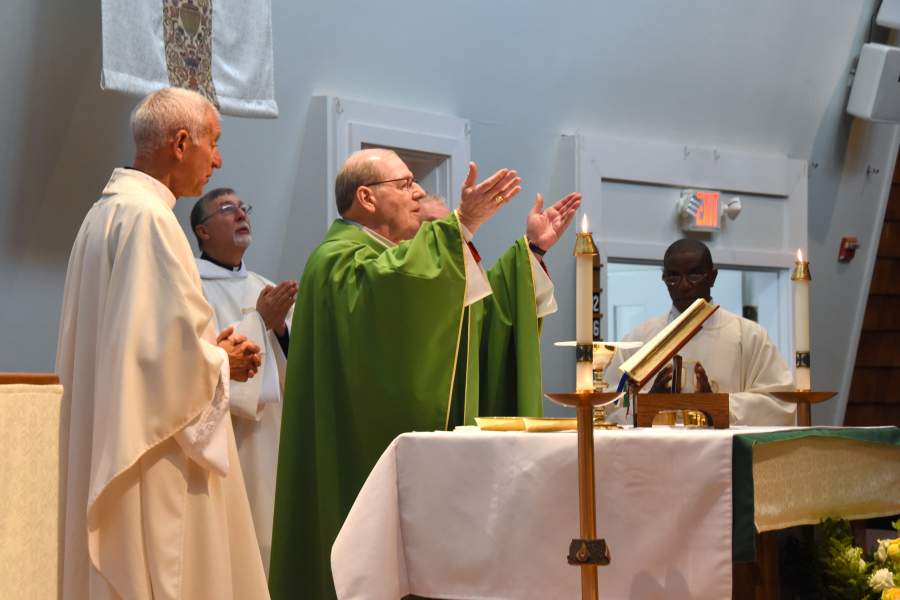 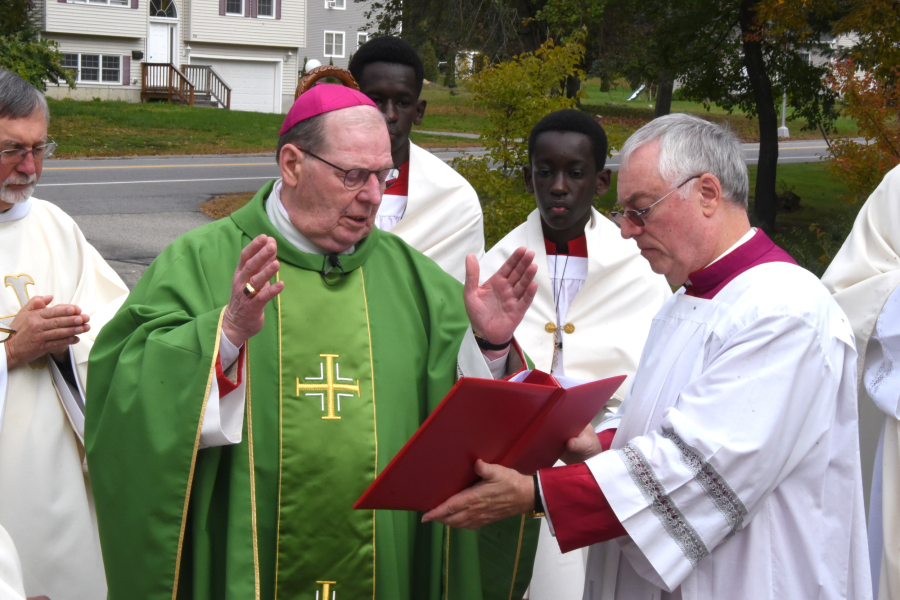 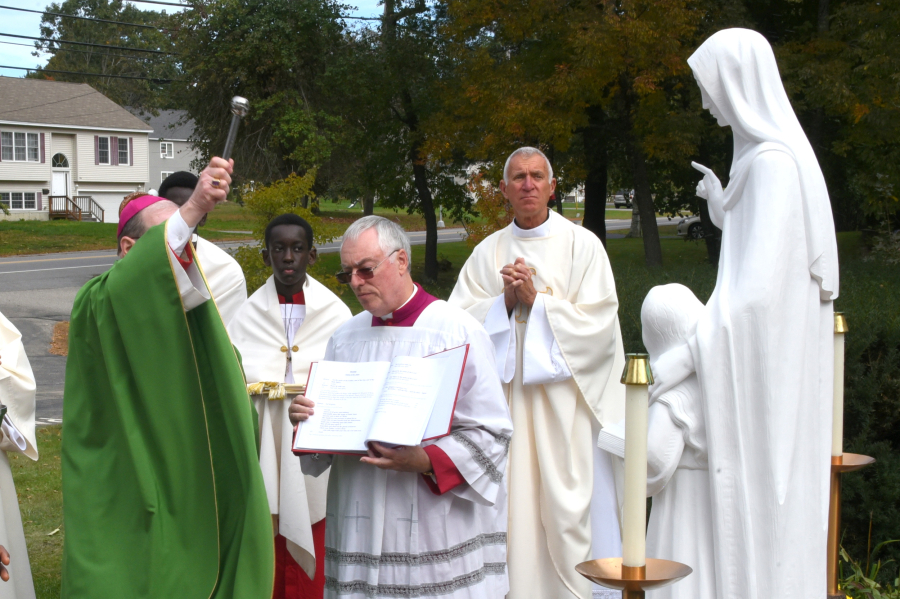 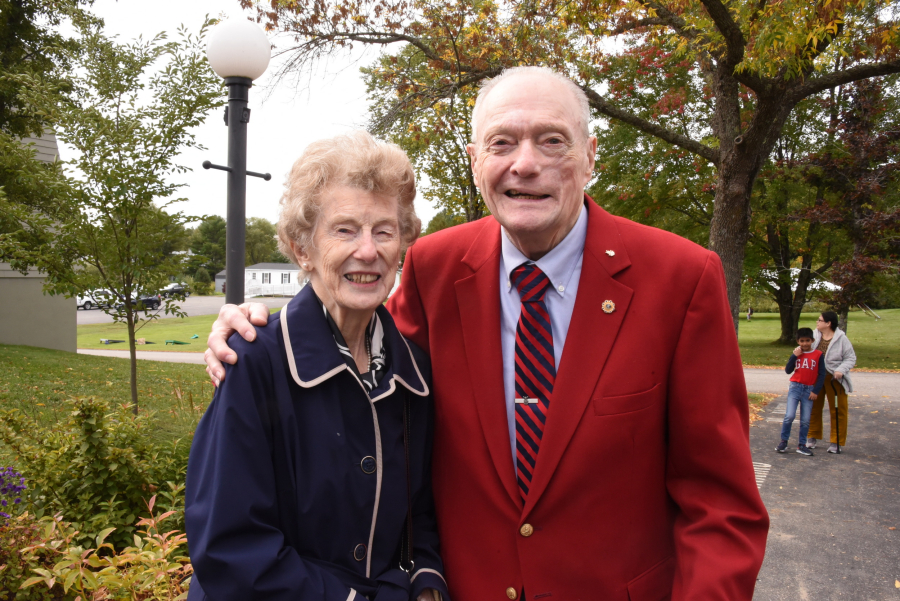