Memorial of St. Joseph the Worker celebrated in Portland with Mass and Blessing of Tools 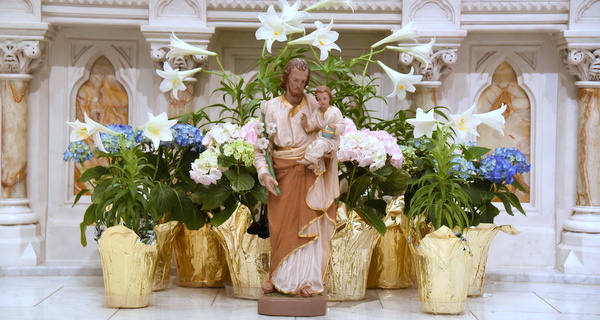 The Saturday morning Mass was celebrated by Father Kevin Upham, parochial vicar of the Portland Peninsula & Island Parishes, who told the dozens gathered that “everything in this life that is good and worth having involves work and effort. St. Joseph understood this in his earthly life working to provide for Mary and Jesus.”

Father Upham said the work we do can bear fruit in surprising ways, as we strive for eternal life in heaven and as we try to help others on their journeys. He prayed that “all that we do, from our professions, daily chores, and even hobbies, be a light to the joy of God.”

Prayers during the Mass were offered for all workers, most especially first responders and health-care workers, who have risked their lives to serve others during the pandemic.

At the conclusion of the Mass, the congregation joined in chanting the Litany of St. Joseph, repetitive prayers that seek St. Joseph’s intercession.

Parishioners then gathered in the outside garden of the cathedral, where Father Upham and Father Dominic Savio, HGN, also a parochial vicar of the Portland Peninsula & Island Parishes, led a brief service, praying that God would “protect your servants, who stand before you devout and faithful, bearing the tools of their trade.”

Father Upham then blessed various tools that parishioners had brought with them and sprinkled them with holy water. They included rakes, shovels, cleaning tools, and even a firefighter’s helmet and mask.

“To accomplish God’s purpose, we use suitable tools and so in some way cooperate with him and share in the good of redemption.  Let us, therefore, bless God from our hearts for his wonderful plan and pray that his help will protect and sustain us as we work,” Father Upham said.

The Memorial of St. Joseph the Worker is one of two feast days celebrated in honor of the saint. The other, on March 19, celebrates St. Joseph as the spouse of the Blessed Virgin Mary.

The Memorial of St. Joseph the Worker was initiated by Pope Pius XXII in 1955.  The pope sought St. Joseph’s intercession in the fight against communism and wanted to lift up the dignity of work, one of the core principles of Catholic teaching.

Additional celebrations in honor of St. Joseph are being held in the Diocese of Portland and dioceses around the world this year because Pope Francis declared December 8, 2020, to December 8, 2021, to be the Year of St. Joseph. The pope said the year was an opportunity to “increase our love for this great saint” and was a reminder that those, like St. Joseph, “who appear hidden or in the shadows can play an incomparable role in the history of salvation.”