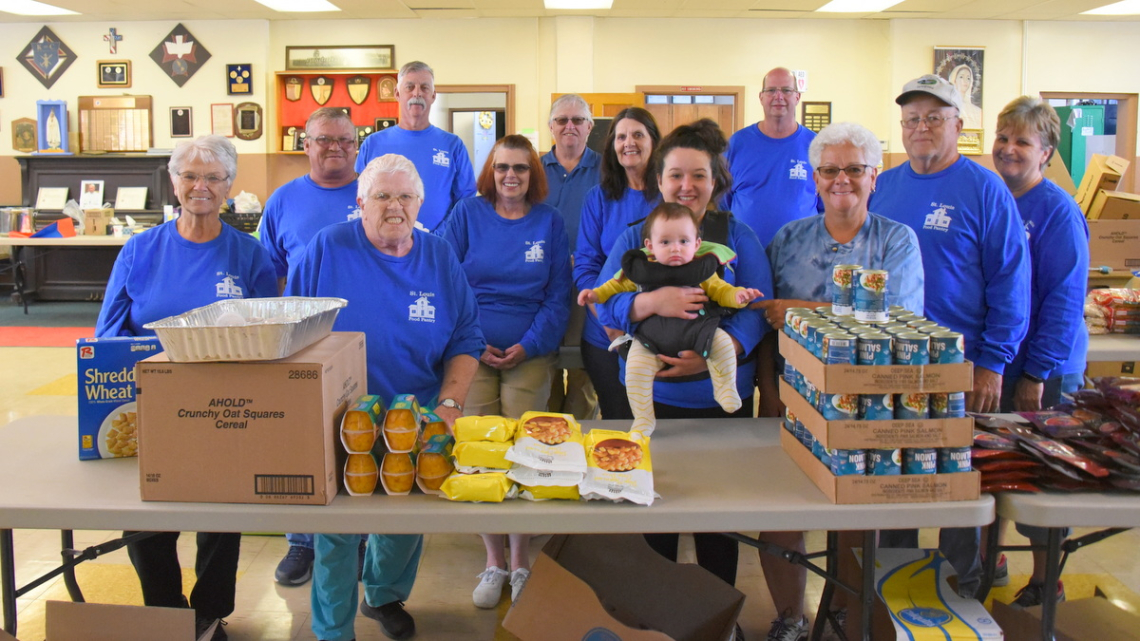 It’s a half hour before the St. Louis Ecumenical Food Pantry in Limestone opens, and vehicles are already pulling into the parking lot. There to greet the drivers is Mark Bourgoin, who manages the pantry with his wife, Lois.

“I pretty much know everyone by face. I can put a name to a face, and I know exactly what their family size is,” he says.

The food pantry, which is located in the basement of St. Louis Church, serves approximately 70 clients each month. That number includes both individuals and families, some with four or five or even seven members. Mark says the number of people using the pantry has been steadily climbing.

“We add about five clients each month,” says Mark. “There are so many people who need assistance in some capacity, and they need to be able to have an avenue of where to go.”

For those already on tight budgets, the recent rise in prices on everything from food to fuel has only made matters worse.

“Gas prices are huge right now, plus I have a lot of medical appointments, as my daughter does. By the time we’re done, there is not much money left,” says Heather Small, who has twin five-year-old boys, a 16-year-old daughter, and an adult son. “It’s hard and becomes very expensive.”

“The canned goods and bread I get just save me so much money. That way, I can take my money and go and pay for my fuel bills, because those are sky high, and gas for my car,” says Elizabeth Kleinert, a client from Limestone.

The pantry serves people from the towns of Limestone, Caswell, and Hamlin. It is open the first and third Tuesdays of each month, with the beginning of the month being the busier of the two. Each person receives a box of non-perishable food, along with a bag containing frozen foods.

In addition, some individuals over age 60 are eligible to receive an extra box of food through the U.S. Department of Agriculture’s Commodity Supplemental Food Program.

“The average client is getting probably close to 70 or 80 pounds of food. Then, for the client that also gets a commodity box, it’s over 100 pounds of food,” says Mark.

Mark travels with Steve Brooker, another volunteer, to the Catholic Charities Food Bank in Caribou on the first Monday of each month to pick up pallets of food, most of which was purchased from the Good Shepherd Food Bank in Auburn. In addition, the pantry receives assistance from some businesses. McCain Foods, for instance, provides potatoes, and Hannaford donates products that are approaching their expiration dates, along with fruits and vegetables that are nearing the end of their shelf life. Mark and Lois drive to the Hannaford store in Caribou every Sunday after Mass.

“We usually get 15 to 18 banana boxes,” says Mark. “All the baked goods go into the freezer. Fresh fruits and vegetables go into the refrigerator. Then, on Monday, I’ll call all our clients and let them know we’re going to have an extra shopping day.”

“They’re so nice here. They’ll call you and say, ‘We don’t want it to go bad. Do you want to come here and get some fresh fruit?’ And I’m right here,” says Elizabeth. “I cannot afford fresh fruits and vegetables. They’re way too high.”

Mark and Lois took over management of the pantry in August 2021 when the person who had been running it was no longer able to do so. Lois says while they were hesitant to take it on, they didn’t want to see the pantry close. Lois says she experienced food insecurity as a child and knows how challenging that can be.

“I’ve been there, done that. I don’t want to go through it again, and I will try my hardest to make sure someone else doesn’t have to go through it,” she says. “If I have a will and a way to help somebody else who is struggling, I’m going to do it.”

While Mark and Lois put in a lot of time at the pantry, something Mark balances with a full-time job, they are fortunate to have the help of 14 volunteers.

“If it wasn’t for our volunteers, there would be no way we would be able to do this,” says Mark.

The volunteers pack and organize the boxes and bags, use handcarts to wheel them outside, and place them in vehicles.

“It’s good to help. I just feel that’s our calling anyway. We should help one another. God asks us to do that,” says Artie Bernier, a volunteer from Caswell. “When I do something for the Lord, and I know that He’s asked me to do this, He leads me. I want that love and joy, and that’s what we can spread to other people.”

“I want to give back. I want to do something nice because they did something nice for me,” says Jennifer Booth, who is both a client and a volunteer. “I enjoy all the people. I made a lot of new friends.”

Those who serve at the pantry say they want to make sure everyone feels welcome, whether they are a volunteer or a client.

“There is a stigma attached to coming forward, so we try to break that and show people that there is nothing wrong with getting the food you need. We’ll gladly get it out to you,” says Alan Mulherin, from Limestone, who volunteers along with his wife, Roz.

“Everyone knows everyone, so we’re just like a great, big family,” says Diane.

“They’re like family. I love coming here just so I can talk to them,” agrees Scott Tilmont, a client from Caswell. “They are very nice. It kind of makes my week, every other week. That’s my place to go.”

Scott, who is retired, says the pantry is a big help to him and his wife, who is still working, because they are helping to raise one of their granddaughters.

“A lot of times, when I go grocery shopping, I don’t have to buy meat because I already have meat from what they had, along with canned goods,” he says. “With a growing kid and being older people, we need good nutrition.”

Tom and Helen McFerrin, who recently retired and moved to Limestone, say the pantry was invaluable to them while they were waiting to receive their first Social Security checks.

“We were looking for places that might be able to help, and we just happened to meet Lois and Mark and got talking. So, we came over, and it’s been very helpful,” says Tom. “It’s been very, very much a blessing.”

“We were very grateful,” says Helen. “It’s been a lifesaver.”

The Limestone Ecumenical Food Pantry was recently able to make improvements to its facility thanks to a $35,000 grant from the Good Shepherd Food Bank’s Capacity Building Grant program. Mark says the money was used to buy a utility trailer to transport the food from Caribou, two convertible freezer/refrigerators, and hand trucks to make it easier to wheel boxes of food up a ramp and outside.

The pantry was also renovated, with new sheetrock, shelving, paint, laminate flooring, and energy-efficient lighting. The ceiling was lowered to conserve energy and conceal pipes, and storage space was created for paper products and other household goods, items the pantry didn’t previously offer.

With the only bid for the project coming in well above the grant amount, Mark, who is Past State Deputy of the Maine Knights of Columbus, says he turned to fellow Knights in Limestone and Caribou for help, and they did much of the work themselves.

“Every single day, we’re doing something right now, especially because of the renovations of the pantry,” Mark says.

Although there seems to always be work to be done, Mark and Lois say with the generosity of their parish community and with their faith in God, they are confident it will work out. 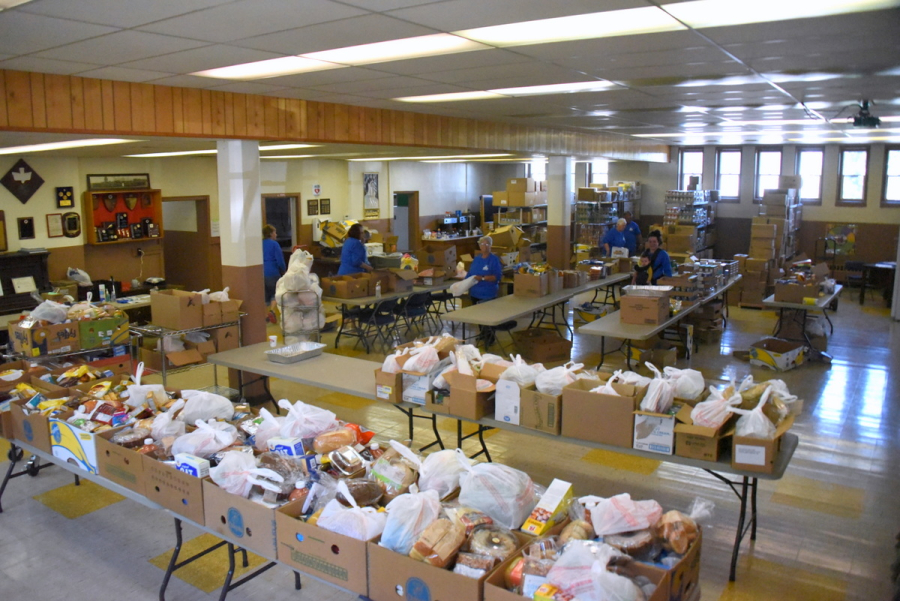 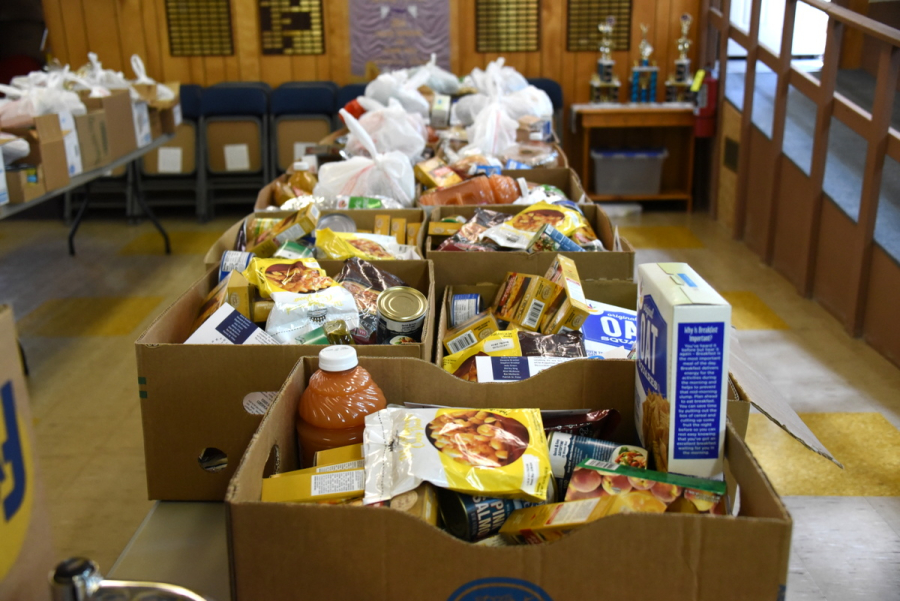 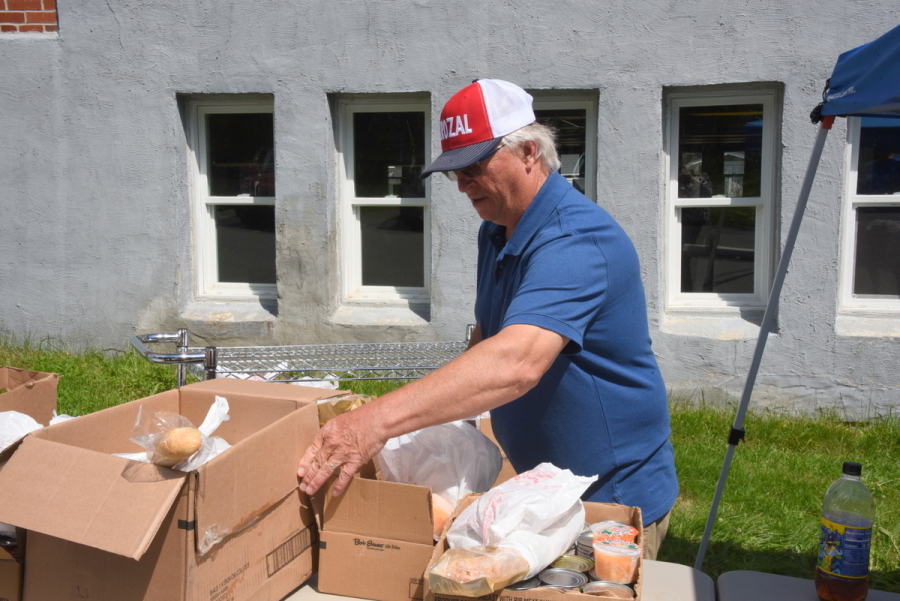 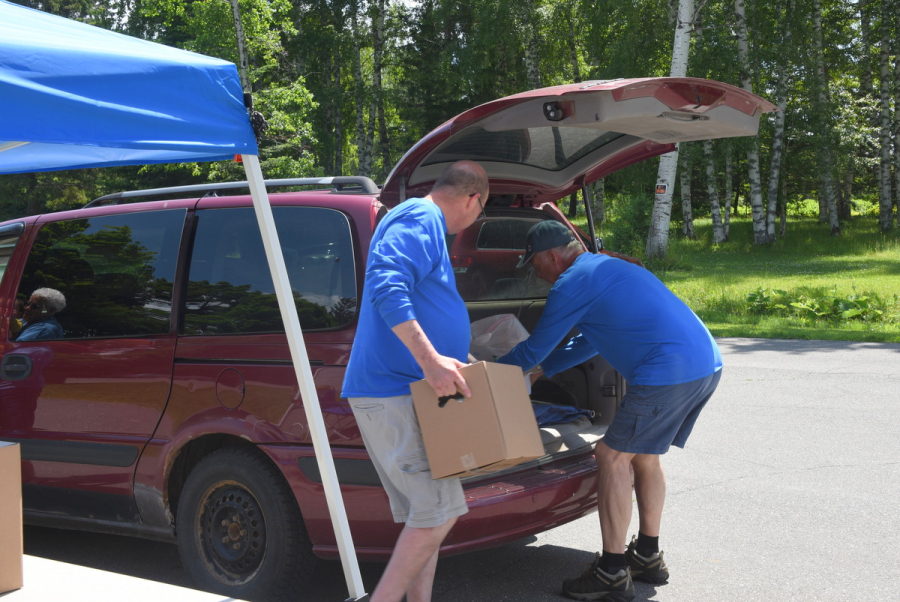 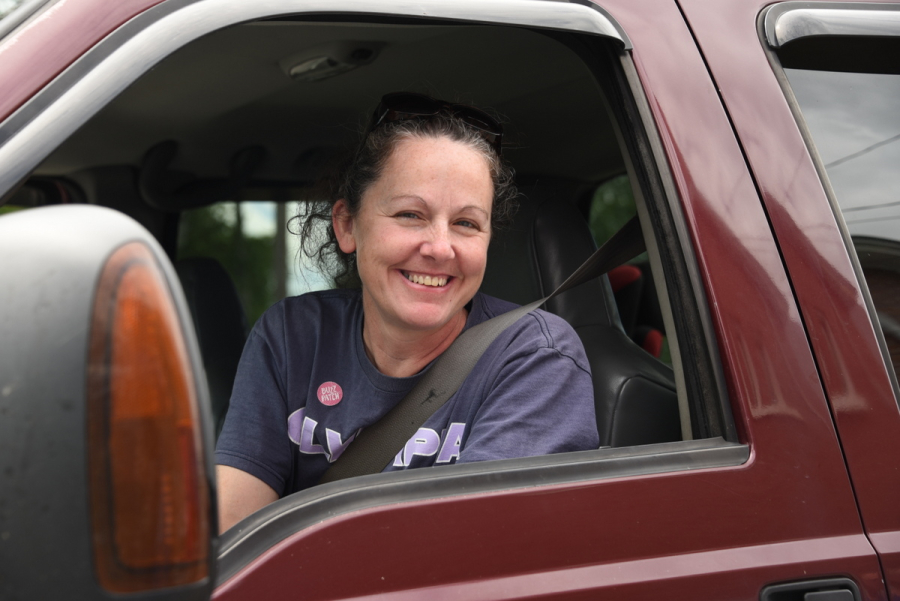