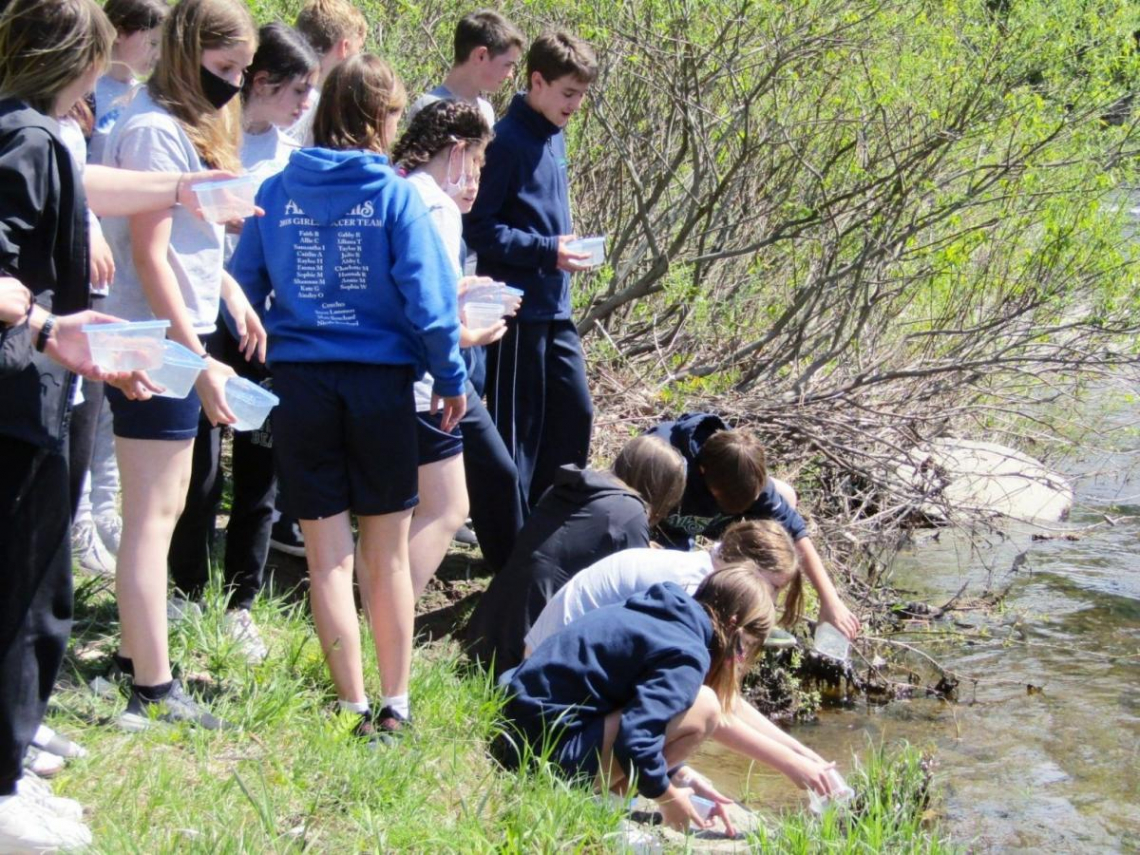 “So many students say they’ve looked forward to this for a long time,” said Vanessa Rehmeyer, science teacher at All Saints Catholic School in Bangor. “Raising an endangered species is a big deal. Our class has worked hard to study and maintain these incredible fish.”

It’s a process that began in February, when seventh graders at All Saints welcomed nearly 200 Atlantic salmon eggs into their science laboratory, and culminated in May with a live salmon release.

“The class observed the eggs as they developed. We had to keep the fish tank just above freezing to mimic the temperature of the Kenduskeag Stream (in Bangor),” said Rehmeyer.

The students checked the equipment and temperature regularly to make sure the project stayed on track. In addition, each student researched an aspect of the Atlantic salmon and presented a poster to the class.

“Many were amazed to learn that Atlantic salmon are anadromous, migrating from freshwater to saltwater and back again to breed,” said Rehmeyer. “When Atlantic salmon return from the ocean, they can be upwards of three feet long. This salmon has a long history in Maine as the ‘king of fish.’”

By May, the salmon at All Saints had developed from eggs into alevin, an immature life stage of the Atlantic salmon. Usually the project culminates in a field trip to Craig Pond National Fish Hatchery to see how salmon are raised and bred. Unfortunately, seventh graders could not go this year because of pandemic restrictions.

Instead, they released the 196 salmon into the Kenduskeag in May.

“It was a very powerful learning experience that helped students become better stewards of our river, fish, and related wild life,” said Matthew Houghton, principal of All Saints.

“It feels like a victory, especially in this unprecedented school year. Because of the pandemic, many Maine schools could not participate in raising salmon eggs. We were blessed to be in school full time, which allowed us to learn in a very hands-on way,” said Rehmeyer. “Our students grew to understand that stewardship of nature is crucial. After all, they are going to inherit the responsibility of looking after our most vulnerable populations.”

All Saints Catholic School has collaborated with the Maine Atlantic Salmon Federation for years through the Fish Friends Program, which provides materials and mentoring to schools around Maine. For more information, click here.