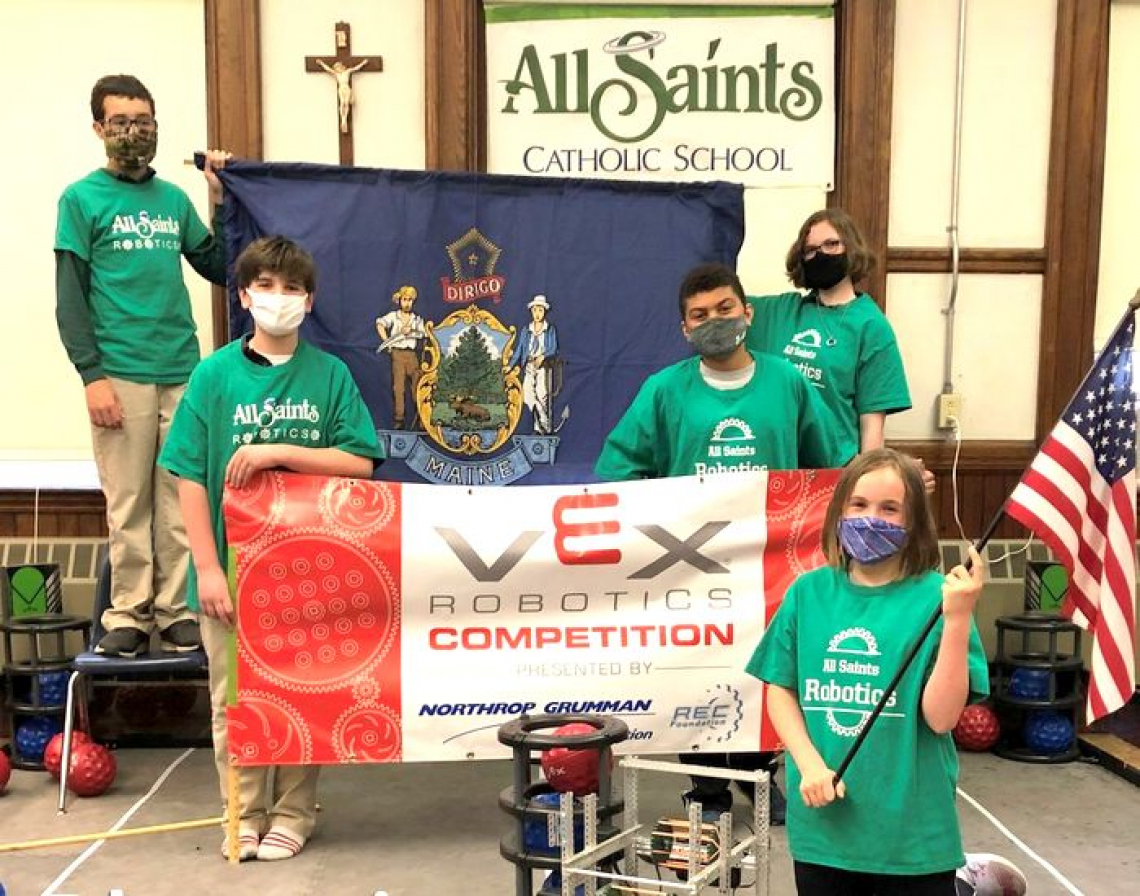 The All Saints Catholic School Robotics Program in Bangor has been celebrated around Maine for its rise from creation to becoming one of the best in the state in just three years. Now, the plaudits are coming from beyond the borders and across the world.

The program has been awarded the Inspire Award after competing in the VEX Robotics Live Remote World Championship this week. Team Phoenix, competing for All Saints in the Middle School Division, earned the award for “being the most passionate and positive team at the event.” Over 1,700 teams, representing 49 US states and over 35 countries competed in the championship this week.

“The key criteria for this award are that the team exhibits passion and a positive attitude, integrity, and goodwill toward other teams, coaches, and spectators,” said Matthew Houghton, principal of All Saints. “It’s gratifying that the teamwork and good will that defines this program has been noticed on the world stage.”

What made the achievements of the robotics team even more impressive this year was that the planning, creating, and competing took place in the middle of a pandemic.

“Our teams started meeting on Google Meet in April 2020, remotely, to discuss robot designs and driving strategies,” said Casey Murphy, the head coach of the robotics team and the technology director at All Saints.

Usually, teams start to compete in October, but it was spring before the All Saints’ students had the chance to participate in a skills competition.

“We participated via livestream from the school. For that competition, the teams had four chances to earn the best score that they could, competing against teams all over New England. We missed our first chance, taking the time to adjust to the new remote competition rules. Chances #2 and #3 were unexpectedly lost due to a weeklong mandatory remote learning week. On the final chance, All Saints took first and fourth place among the eight Maine middle school teams competing, and our first place team earned an invitation to the first ever VEX Robotics Live Remote World Championship,” said Murphy. “To win the Inspire Award highlights the team’s character and integrity. What a wonderful award for our Catholic school students to receive! It was a great way to end a challenging year.”

Team Phoenix was not the only team at All Saints Catholic School to walk away with a trophy this year. CyberSaints won the Create Award at a remote judging competition hosted by York High School in April.

“The CyberSaints shone brightly during their team interview, and the judges remarked that they were impressed with their engineering design notebook and the time the team took to explain their design process in detail,” said Houghton.