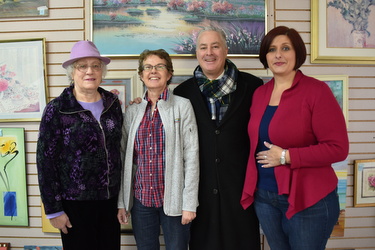 It’s ten o’clock in the morning, and customers are already waiting for the doors to open at The Attic in Bangor.  Although it’s a special day at the thrift store - the first anniversary at its new location - volunteers will tell you that it’s not an unusual sight to see.

“We have people waiting at the door every single day,” says Donna Greenlaw, one of the store’s volunteer leaders.  “We see the same people every single morning, standing at that door.”

Many of the early birds are dealers, seeking to check out just-arrived  merchandise in hopes of scooping up something for resale, but there are also many loyal customers who make The Attic part of their regular routine.

“I come here every day on my lunch hour,” says Suzette Darge, who is from Canaan but works in Bangor. “I just always seem to buy something. I get something for my husband, myself, my son. I tell all my work people about it.”

“I love this place. I come in all the time. There are good buys here, and I like helping charities out,” says Nancy, a customer from Bangor.

“I come here at least three times a week, sometimes more if I’m in town, because they have a nice selection and very fair prices. The people are delightful, and it’s a charitable cause,” says David Odell, a customer from Hampden. 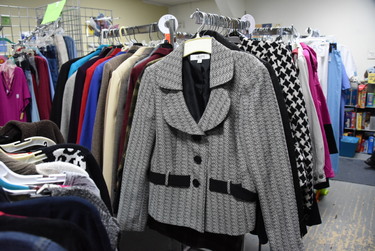 The charitable cause the store benefits is All Saints School in Bangor. The thrift store is part of St. Paul the Apostle Parish, and all proceeds from it go to the school.  Thanks to the new, larger location, it’s no small change.

The new store on 54 Cumberland Street is just a half mile from its former Center Street location.  When looking for a new site, the parish recognized the need to stay in the same neighborhood where the store has been located for decades. As valuable as The Attic is to All Saints School, it may be even more so to the community.

“This is a place where a lot of people love to come and shop, and they’re able to,” says Father Frank Murray, pastor of St. Paul the Apostle Parish. “This is raising a lot of dollars for the school, which keeps our tuition down, and it helps the parish in terms of finances, and then, a lot of the population, they rely on secondhand stores, and this is one of the best in town in my opinion.” 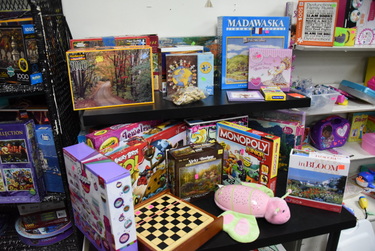 “A lot of people come in just to socialize and to look at the stuff we have.  They may not purchase a whole lot, but they’re here if not every day, every other day,” says Leona Hatch, another of the volunteer leaders.

While the store’s location is new, what hasn’t changed are the deals shoppers can find.

“We’ve stayed true to the roots of the pricing.  We have extremely low pricing on very nice clothing.  Our pants and shirts, for example, start at $2. If it’s a nicer brand like a Talbots or L.L. Bean, we may do it for another dollar or so, but we keep it very reasonable,” says Angela.

“The prices are great. The clothes are wonderful.  Yesterday, I bought a pair of Born shoes that would have probably cost me $80 for $2.  I love everything here,” says Suzette. 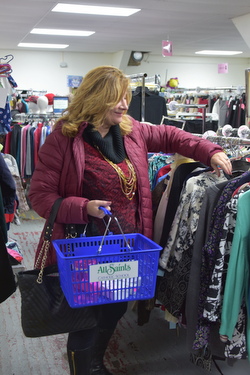 While clothes are the biggest sellers, you can find a lot of other treasures at The Attic including artwork, books, dishes, glassware, holiday merchandise, housewares, sporting goods, and toys.

“I don’t ever come in looking for anything in particular because they have such a diversity.  I’m kind of a picker. I find interesting things in here at very fair prices,” says David.

“If you’re looking for it, we can find it, or we pray for it, and it arrives,” says Houghton.

“We see miracles happen. Minor ones, but they happen. Somebody could use a wheelchair, and lo and behold, the next day, one will come in,” says Leona.

“Every day it’s something different,” says Donna. “I walk out there, and I’ll say, ‘I’ve not seen this before.’”

The volunteers are grateful for the support of St. Paul the Apostle parishioners, who are the biggest donors.

“This place wouldn’t operate without the parishioners giving us donations, plus what we get from the other people in the area,” says Leona.  “It’s heartwarming to see the community involvement in this endeavor. We’ve been blessed.

The Attic, which is open Monday through Saturday, is entirely volunteer run.  There are currently of them, many whom had or have children who attend All Saints.  When the store expanded its hours to include Wednesday afternoons and Saturdays, Angela began recruiting parents to fill the extra shifts.  Sometimes, it becomes a family affair with students helping out as well.

“These kids are learning valuable things, and they love it. Once families come in to volunteer, they get hooked,” says Angela. 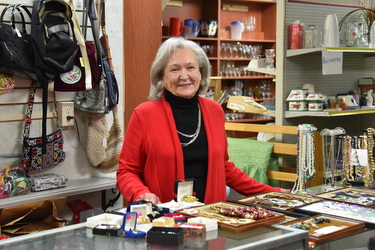 While many volunteers work a shift every other week, either Angela, Donna, or Leona is there every day the store is open.

“It’s given me something to do. I don’t sit at home and read books as much as I used to,” says Leona, who had three children who attended the school and has volunteered for six years.

“It benefited the school that my kids went to, and my background was in human services, so it kind of meshed,” says Donna who began volunteering eight years ago, after she retired. “You’re doing stuff for the public and helping folks, and as I said, my kids went to All Saints, at the time it was St. Mary’s School, so I wanted to give back to the school for what it gave to my family.”

“It’s a way that I can give back to the school but not be in the school,” says Angela, whose youngest daughter is an All Saints sixth grader.

“I like the low numbers in the classroom. I like the fact that she can celebrate Christmas and not feel ostracized for saying Merry Christmas,” she says. “There is also public speaking. Our kids, from the time they can read, they do morning prayer, and they’re reading in front of their classmates. Then, when they get older, they’re reading at Mass. Then, you have the religious aspect. There are so many different things.” 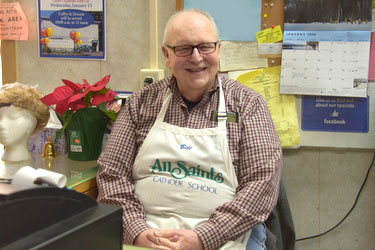 Although the work can sometimes be a bit challenging, the volunteers say they enjoy serving.

“I love it. I love the people. I like volunteering. I thoroughly enjoy it,” says Yovanne Stevenson, who has volunteered for 20 years.

“Since I’ve retired, I’ve been doing it,” says Bill Crawford, another 20-year-volunteer, whose wife previously donated her time. “She had a good experience, so I thought, ‘That sounds like a good idea. I’ll try it out.’ And I’ve stayed.”

“I like working with all the people. A fair number of our volunteers, they’re in their 80s, and it’s so cool to work with them,” says Donna.

“Volunteering here has become like a friendship,” says Angela.