'I am a firm believer in God’s plan.' 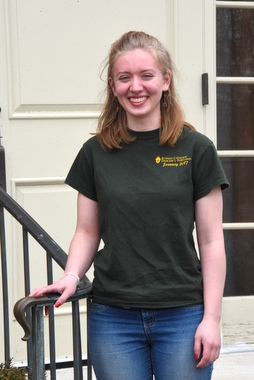 When Olivia Mosher headed to Husson University in Bangor in the fall of 2018, the video production major from Presque Isle made a commitment to work diligently not only at her studies but at keeping her Catholic faith alive and vibrant.

“I know that a lot of people, once they go to college, just kind of lose their faith, and I did not want that to happen to me. It was really important to me that I try to do what I could do to stick with it,” she says.

For Olivia, that meant taking a leading role in connecting with fellow Catholic students at Husson, as well as with those at the Newman Center at the University of Maine in Orono.

“I wanted to do everything I could to help my faith and to help other people in their faith as well,” she says.

Raised Catholic, Olivia says her faith really took hold during her high school years, something she attributes to a Steubenville Youth Conference she attended in Massachusetts. The conferences, presented by Franciscan University of Steubenville in Ohio, aim to give high school-aged students an encounter with Christ. Olivia says that is what happened to her.

“It really just opened my eyes to what our faith can be,” she says.

Olivia says she was especially moved by the eucharistic adoration, during which the monstrance containing the Blessed Sacrament was carried through the crowd.

“It was very emotional and very powerful, and I think it was the moment that I really felt God’s presence and God’s love for the first time,” she says.

Prior to the conference, Olivia says she didn’t have much interest in participating in youth ministry. After it, she became more and more involved with it.

“I started going to more events and retreats and things like that. I gained a deeper connection with my friends, and then, I would meet more people and make more friends. When you have people around you who believe the same thing you do, it can help you grow in your faith, because they’re also there to hold you accountable,” she says. “That helps me strive to be as good a person as I can be.”

When she arrived at Husson University, Olivia wanted to make similar connections. She decided that she would start a Catholic club on campus, only to find out that a friend of hers, Maria Andrew, had already done so. The group was called REIGN, which stands for “Redeeming eagles in God’s nest.” The eagle is Husson’s mascot.

“She texted me and said that she and a couple of other people had already created one, so I was like, ‘Oh, sweet.’ So, I jumped into that very quickly.”

REIGN had about 10 members at its peak, and it was hoped, with some outreach, those numbers would climb. Unfortunately, the pandemic made that difficult.

“It’s hard to gain new members when you’re not really allowed to table and do events,” Olivia explains.

Nevertheless, REIGN still provided Olivia, who became president of the club, with an important avenue for strengthening and sharing her faith.

“I love leading others to Christ and teaching people about the Catholic faith even when I don’t have all the answers,” she says.

Before the pandemic, the group met every Monday. Olivia says they would discuss different topics, sometimes watch a video, and then do a related activity. Although social contact was more limited this year, she says they still participated in weekly Bible study and did service-related activities such as making rosaries.

“We attempted rosary making for one of my friends who works at the hospital and said there were lots of Catholics there, but they didn’t have rosaries,” she explains.

Along with REIGN, Olivia had the benefit of being less than a half hour away from the Newman Center at the University of Maine in Orono, something with which she first became connected at the end of the first semester of her freshman year.  Knowing how impactful the Steubenville Conference had been for her, Olivia wanted to attend SEEK, a conference sponsored by the Fellowship of Catholic University Students (FOCUS). There are FOCUS missionaries at the Newman Center, so Olivia connected with one of them, and joined the group that was going.

“That conference was a lot about putting trust in God, because I knew absolutely nobody who was going, and I was jumping on a plane with 30 strangers and going to Indianapolis,” she says.

As with the Steubenville conference, it led to a deepening of her faith, as well as new friendships.

“I became a part of another really great Catholic community, and I am very grateful for that,” she says.

Olivia began attending Sunday Mass at Our Lady of Wisdom Church, located at the Newman Center, as well as weekly adoration there, sometimes staying for daily Mass afterwards. She also took part in Bible study with one of the FOCUS missionaries.

“I’m participating in several different ways, several different times a week, in things that will bring me closer to Christ,” she says. “I’m leading Bible study and I’m in a Bible study, so at least twice a week I’m reading Scripture. Adoration – usually every week I go, so I’m spending an hour and a half in the Lord’s presence from that. Then, I’m going to the Mass, and another Mass or two if I go to daily Mass there. So, I think, just by putting a lot of time into faith and surrounding yourself with people who believe in the same things you do, and who also are there to help you grow, I think that has definitely helped me.”

She says her faith has been invaluable, especially during times of hardship.

“By developing that faith, I think that it just helps me realize the big picture,” she says. “I am a firm believer in God’s plan and knowing that He has one, so it gives me reassurance that when things go wrong, I know everything happens for a reason and that God is always going to be there. I don’t know what I would do without that assurance.”

She remembers, for instance, a time last year when she was struggling.

“I started going to daily Mass, and it helped me so much, filling me with a lot of peace. Nobody told me to do that. It was like, well, life is kind of hard right now, so I’m going to go to church. And I did and it helped. I could see the effects.”

Olivia also participated in discipleship with the FOCUS missionaries, which is designed to help college students grow in knowledge of their faith and feel comfortable sharing it.

“I think discipleship has given me a lot of tools, and I’ve learned a lot from going,” she says. “The hardest thing about that is learning to deal with rejection, because you get rejected a lot, and just learning to keep asking and keep inviting people to just do fun things and to read Scripture together and stuff like that.”

Olivia graduated from Husson this May with a degree in video production and says she would like to use her skills to benefit the Church.

“I do like working in a Catholic faith environment, so I really would love to work for some sort of Catholic media company or something,” she says.

This spring, she assisted the Diocese of Portland in producing the Catholic Appeal video, which can be found at www.portlanddiocese.org/Appeal. The Newman Center and campus ministry throughout the diocese is funded by the appeal.

While Olivia arrived at college determined to not lose her faith, she now enters her post-college years with it stronger than ever, a credit to REIGN and her experiences at the Newman Center.

“I feel like a lot of people think that the Catholic faith is dying with the younger people, but having an active Newman community shows that it’s not,” she says. “It shows people that there are Catholics in our generation who are willing to go to great lengths to help their own faith and help others find theirs, because nobody is