A Legacy of Compassionate Care 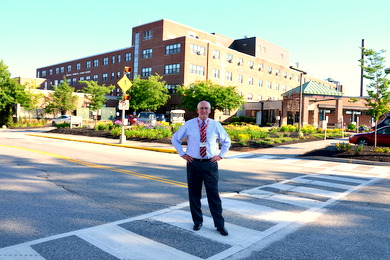 When Lee Myles was first offered a job at St. Mary’s Health System in Lewiston, he remembers being concerned about the five-year commitment he was being asked to make.  Those five years ended up turning into 23 in a workplace he calls wonderful and doing a job he describes as perfect.

He says what makes St. Mary’s so special are the strong shoulders upon which it stands, those of Saint Marguerite d’Youville and the Sisters of Charity of Saint Hyacinthe

“This whole environment is really magical because of the mission,” Myles says. “The secret sauce or the magic that we have is a mission that is based on Catholic social teaching.”

While once there were dozens of sisters on the hospital campus, now there is just one, but Myles says that only magnifies the importance of making their story known and carrying on their legacy.

“The real importance is to keep that story going and to keep people attracted to it. I can honestly say that our medical staff, our board, and our employees fully embrace the mission. And when you have that, you can really deal with any challenge,” he says. 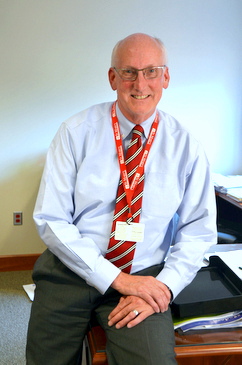 “One of the things that I keep reminding our employees is, as much as we have financial challenges today --  and we’ve had financial challenges, I think, since I’ve been here -- the sisters had world wars. They had the flu epidemic in the 20s. They had to function when there was very little reimbursement, if any. So, I say, when we have challenges, they’re really just bumps in the road compared to what the sisters had.”

Myles says one of the most significant changes that put the hospital on more level ground was the transfer of sponsorship to Covenant Health Systems in 1992, the same year Myles was hired. Myles says Covenant began investing in the health system while, at the same time, embracing the hospital’s founding principles.

“What they understand is the true history behind why these organizations were established,” he says. “Covenant spends a lot of time and effort on education of staff and management on what’s the difference of Catholic healthcare, what’s the purpose.”

Myles says a strong management team was put together, led at the time by former CEO Jim Cassidy, and they worked to engage the medical staff.

“I think what we did, and I’m very proud of it, was getting the medical staff to work in partnership, looking at quality and also looking at our costs.  And that environment really is what we have today.”

Myles says he has never believed in a top-down management approach. 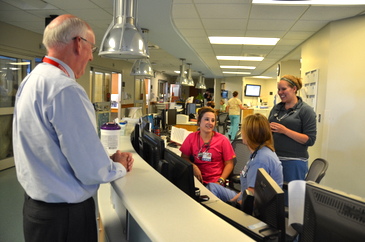 “I believe in collective wisdom. In other words, if you’ve got really talented people, you listen to those people, and you come up with a decision amongst the group,” he says.  “I have wonderful relationships with my medical staff, the board, the employees.”

Most of the physicians who work at St. Mary’s are now employed by the hospital, a move necessitated by the financial difficulties of operating a private practice in an area where many patients are on Medicare or MaineCare or have no insurance coverage at all.

“Government payers will pay you less than it costs you to provide the service, so you lose on any patient. It’s not less than you charge; it’s less than it costs, so in Lewiston and other areas of the state, doctors have said, ‘I can’t afford it any longer.’”

While it has meant higher costs for the health system, Myles says it has kept doctors in the area and, in keeping with the health system’s healing mission, it has ensured that patients get needed care.

“We say to (physicians), when someone comes into the practice, you are blind to what the payment source it. It doesn’t make any difference to you. You need to take care of everyone that you see,” he says. “So, our practices lose a lot of money because so many people come through with no coverage or governmental payers, but they’re getting the care. That’s the most important thing for us.” 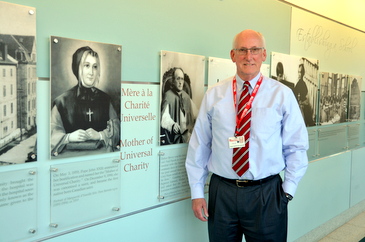 The dedication to caring for all in the community is also why, when many providers have stopped offering behavioral services, St. Mary’s has become a leader in providing them, including recently building a new behavioral services emergency department. Myles admits it hasn’t been easy.

“We struggled last year because we lost over three million dollars in our behavioral services. So, we said, ‘O.k., what is the strategy?’  One strategy could be to get out of the business like some organizations have done. And we talked about whether that made sense for us. Then we said, you know, all we are is a reflection of the community, and the mental health needs of this community are huge for children, for adults.  Also, the drug and alcohol dependency in this region is high, and so, if we’re a reflection of the community, and no one else is providing those services, how do we do it?”

The answer, he says, has been to reduce the length of hospital stays and to provide more outpatient care, a cost-saving trend in other areas of healthcare as well.  St. Mary’s is even starting to use telemedicine, providing assistance through videoconferencing to nursing homes and emergency departments that don’t have behavioral units.

The focus on mission has led St. Mary’s to take a “whole person” approach to care, something now known as population health.

“We’ve been doing population health for years because we recognize that the whole person needs to have good housing, needs to have food, needs to have access to good medical care, whatever,” he says. “But, also, the important role of us going the next step -- to advocate for those who can’t advocate for themselves -- is what is unique about this organization.” 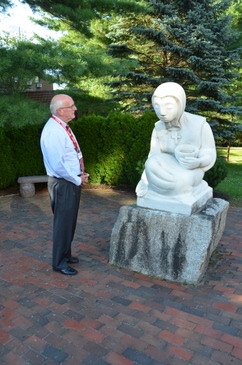 That advocacy has taken many forms – from going before the legislature to argue for higher reimbursement rates to offering educational programs in schools and through the St. Mary’s Nutrition Center.

“Lewiston has the highest rate of childhood obesity in the state, and we’re out there trying to educate children on eating vegetables. That’s a challenge in anyone’s family but we’re educating kids on how to select, cook vegetables,” he says. “We’re also able to do that through the school-based health centers that we have in both Lewiston and Auburn, which really gets at these kids at a formative age for regular, clinical, as well as behavioral needs, and the behavioral need is the biggest need in most school systems. So we’re out there, and that’s all our mission, but they’re also opportunities for growth in the future.”

Myles says when he is asked why St. Mary’s gets involved in so many community projects, such as providing housing, planting gardens, or operating a food pantry, he points back to the sisters.

Despite his love for St. Mary’s, Myles says it’s time for him to step back from days that often extend from 5 a.m. until evening.   Still, it is evident that he will miss the place that has been so much a part of his life for so long.

“It’s a wonderful, wonderful culture,” he says, “just a great, great place to be a part of.”