Following Mary to her Son 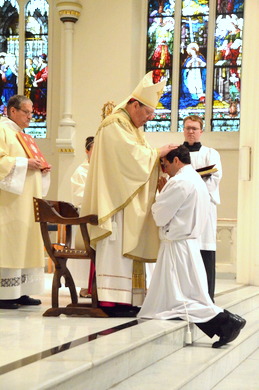 “I loved every second of it!”

From the processional to the final blessing, Matthew Gregory says every step of his ordination to the transitional diaconate was “awesome.” Although he admits there were a few butterflies beforehand, he says they quickly fluttered away.

“The Holy Spirit certainly came within me.  I could sense it,” he says. “I was just at peace and really allowed God to work with me throughout the whole ordination.”

The South Portland native and Cheverus High School graduate was ordained by Bishop Robert Deeley at the Cathedral of the Immaculate Conception in June.  Those ordained to the transitional diaconate are seminarians in their final year of preparation for the priesthood.

“The diaconate to which Matthew is ordained today is a ministry of service and charity. We come to this reflection with the words of the Gospel fresh in our minds, ‘This is my commandment: love one another as I love you,’” the bishop said in his homily.

“Be known as one who serves,” the bishop told Gregory. “Do the will of God generously. Serve God and humankind in love and joy.”

During the rite of ordination, Gregory promised to discharge the office of deacon with humble charity and to proclaim the faith in word and deed according to the Gospel and the Church’s tradition. He also committed himself to praying the Liturgy of the Hours for the people of God and to remain celibate as a sign of his dedication to Christ.

Deacon Gregory says one of the most moving moments of the rite was laying prostrate while the Litany of Saints was sung. 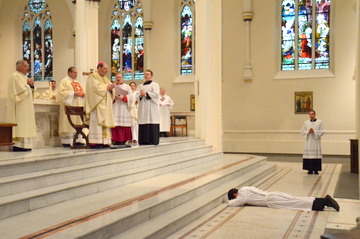 “When you lay down on the floor, you’re laying down your life for Christ. And to call down the saints and the angels who have gone before us, words can’t describe it -- just to know how many people in heaven, who are seeing the face of God, are praying for me and giving me the strength to carry on in being a deacon.”

“She’s the reason I’m here today,” he says. “I keep her close every day, and she is certainly pointing the way to Jesus.”

Deacon Gregory says his devotion to Mary goes back to the eighth grade when friends of his parents introduced them to the apparitions of Medjugorje. Many believe the Blessed Mother appears regularly in the small town located in Bosnia and Herzegovina. 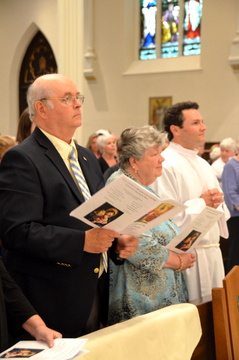 Gregory’s parents began praying the rosary and taught him to do the same.  Before he got his drivers’ license, they would pray it together while they were driving him to and from Cheverus.

“I really think that was one of the main seeds to my vocation,” he says.

Deacon Gregory says he was also drawn in by books about Medjugorge, and he recalls a time when a statue of Our Lady, which was being taken around the state, was kept at his home for a week.

“It was so peaceful. You could go in there at night and just be alone,” he says.

Deacon Gregory says he didn’t really think about a priestly vocation at that time, although others saw it in him.

Instead, Gregory pursued his two other passions: snowboarding and flying planes. After high school, he headed to Lake Tahoe with the goal of either starting a snowboard company or running a ski resort.  Then, missing the ocean and realizing he didn’t want to spend his life in snow, he moved to Florida where he attended flight school, earning his commercial pilot license and flight instructor rating.   He began teaching others to fly, a career that took him throughout the country. 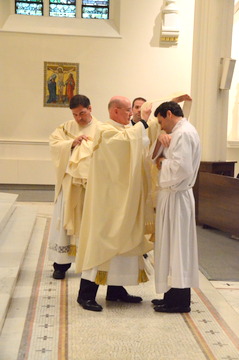 Eventually, he returned to Maine, where his jobs included working with young adults with disabilities.

“That was one of the best years of my life,” he says. “I just fell in love with the kids and just saw what a gift they are.”

Deacon Gregory describes himself as being on a spiritual high at that time, but ironically, he says, before long, that disappeared.

“Here I am, giving of myself, but I put God way, way back. He was on the back burner, and really, I didn’t even see Him there. It was kind of odd,” he says.

He says he stopped regularly attending Mass and started developing unhealthy habits.  His life started taking a downward turn, and he realized something was missing.

“I knew what it was immediately,” he says.  “I knew I needed God back in my life, and so, I did the one thing I knew to do, and that was turn to Our Lady.”

He retrieved a set of rosary beads that had been gathering dust on a shelf, got down on his knees, and prayed.

“Just asking Our Lady to bring me back to God. At that point, I had forgotten the mysteries, so I just made them up,” he says.  “When I started praying the rosary, I just felt this motherly embrace, I mean a true embrace that could only come from heaven. It just enveloped me.”

He began attending Mass again but not before going to confession. 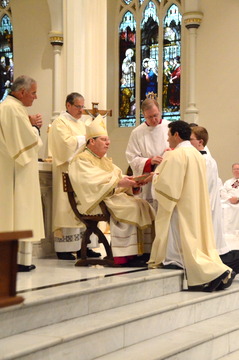 “When I came out of the confessional, it was like a weight had been lifted off my shoulders. I mean, you hear people say it, but it was incredible.”

Soon, Sunday Mass wasn’t enough. He started going to daily Mass and spending time in eucharistic adoration.  A new job at an experiential marketing company in Portland gave him the flexibility to do both.

“My work schedule allowed me to go to Mass each morning at Saint Joseph Church in Portland. I would also go to Saint Joe’s during my lunch break and spend time in prayer before the tabernacle.”

He started to hear the call to the priesthood.  At first, he pushed it out of his mind, but it kept getting stronger.

Deacon Gregory says, throughout his life, he always had big goals. He just hadn’t envisioned this was how they would be reached.

“It doesn’t get bigger than this. This is eternal,” he says.

He contacted the vocations office, where Father Bob Vaillancourt was just transitioning in as director. 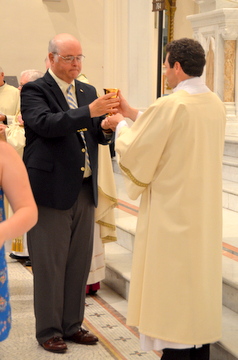 “To be able to go through that discernment and be guided by Father Bob was amazing. He really took me under his wing and just opened my eyes and my heart to so many beautiful gifts the Church offers.”

Although he admits that there were times of doubt and anxiety, he says, looking back at it, he wouldn’t change a thing.

“It led to a greater love for God, a greater trust in God.”

He now says that he gives thanks to God every day for his vocation.