Asking God to look with kindness on them, to renew their marriage covenant, and to increase his love in them, Bishop Robert Deeley blessed husbands and wives who came together for the annual Silver & Gold Mass on Saturday, June 19. More than 50 couples attended the Mass at the Basilica of Ss. Peter & Paul in Lewiston, including one couple who had been married 70 years and many others who had been married 50 years or more.

“These milestone anniversaries speak to us of the enduring power and strength of married love,” the bishop said. “In our gathering in prayer today, we lift each of you, and all married couples, up to our loving God, asking him, who is love itself, to help you to grow in love with each other, even as the years pile up, something you well know is not only possible but part of the beauty of marriage.”

The Silver & Gold Mass is a celebration of the gift of Christian marriage which establishes a holy covenant among a man, a woman, and God himself. The bishop said it is important to celebrate marriage because it is the relationship of a man and a woman, as husband and wife, that gives rise to new life.

“It is, as such, the place where family is born, where life is nourished, where love is taught. It is, in addition, the place where God becomes known. In the experience of love, we come to know there is a source of all love, and that is God. All of that we find in Christian marriage, the foundation of our Church, of our society, our nation, and, indeed, of our culture,” the bishop said.

The couples who gathered at the basilica say having God in their lives has been an invaluable part of their marriages, seeing them through both good times and bad.

“It’s everything,” says Muguette Moulin of Auburn, who has been married to her husband, Tom, for 52 years.

“It is. It’s everything,” agrees Tom.  “I just can’t imagine not having faith. I think they’re so lost, the people who don’t have it.”

“If we didn’t have our faith, I don’t know if we would still be together, because our faith got us through a lot of things,” says Clare Sargent of Sanford, who has been married to her husband, Ray, for 51 years.

“Definitely our faith,” says Joann Finn of Bath, pointing to it as the key to the 50 golden years she has spent with her husband, Jim. “There are always problems that come up, and it’s just knowing that’s where we can draw strength from.” 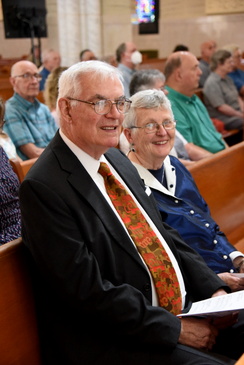 Jim says he believes it was God who brought him and Joann together, describing it as divine intervention. The two met at the Sand Bar in Old Orchard Beach, where they had both gone to hang out with friends. Jim says a beautiful girl caught his eye, and he decided to ask her to dance. She accepted his invitation.

“This tall, dark, handsome guy came up and asked me to dance, so that was the beginning of it,” Joann says.

Joann says that as they talked, they found out they had a lot in common, including both being part Irish and both being Catholic.

“It was just a perfect match,” she says.

When asked about Joann’s best qualities, Jim cites her patience, while, for her part, Joann fondly remembers the way Jim always loved to play with their four children when they were young.

“He would be busy outside playing baseball in the yard. The neighbors would come over. We always had a baseball game going on,” she says.

The Finns say it was always important to them to set a positive example for their children, especially in their faith, which grew through the years as they got more involved in the church. The couple especially credits supportive priests such as Father R. Michael McGarrigle, now deceased, who served at St. Mary Church in Bath.

“Father Mike allowed us to grow in our faith and allowed us to try things. He was overwhelmingly positive and encouraging all the time,” says Jim. “Our faith really developed with our involvement.”

They say the priests at St. Mary were also instrumental in helping their youngest son, Patrick, discover his vocational call. In 2018, the Finns celebrated his ordination to the priesthood. Now a parochial vicar at Prince of Peace Parish in Lewiston, Father Finn was one of the concelebrants of the Silver & Gold Mass. 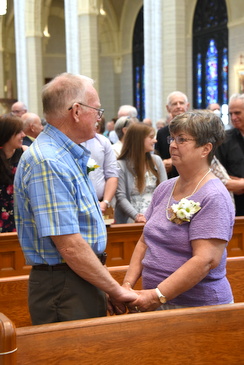 The Moulins say faith has always been a part of their lives, as well.

“That’s the way we were brought up,” Muguette says.

“It always has been,” says Tom.

Muguette and Tom say it was important to both of them to meet and marry someone who was Catholic, which happened when they met at a dance in Brunswick. They each had started out with other dates, but by the end of the night, they were a couple, and they have been together ever since.  They were married in 1969 at the Basilica of Ss. Peter & Paul by Muguette’s uncle, now deceased, who was a priest.

Tom says having God in your marriage gives you someone to turn to and lean on besides yourselves.

In addition to faith, Muguette stresses the need for good communication in a marriage, while Tom’s keys include “a sense of humor, learning how to pick yourself up when you’re down, and knowing that hard work doesn’t bother you.”

A sense of humor is something that Ray and Clare Sargent share, as evidenced by the way they laugh easily together and by Ray’s description of their relationship.

“Clare’s big claim to fame is that she is going to be a saint, and she married me so she could attain sainthood a lot quicker,” he says.

He is quick to add that “Clare is a very caring person, very easy to get to talk to,” while Clare describes Ray as “very loving, kind, and generous.” 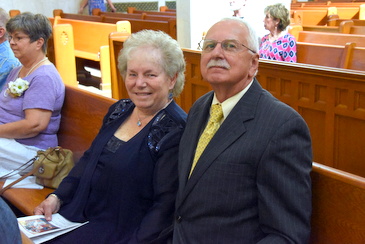 The couple met at Gorham State College, now the University of Southern Maine, where they were biology lab partners.  He did the dissecting. She wrote the lab reports.

They say they went to a dance together and discovered they had a lot in common.

“We got to talking about things we like, things we didn’t like, and it was just amazing how similar our likes and dislikes were. Then, I said something about going to Mass the next day, and she said, ‘Oh, you’re Catholic.’ And I said, ‘Yeah.’ So, we went to Mass, and we’ve been going to Mass together ever since.”

The two have long been active in the Church.  Ray is a member of the Knights of Columbus, including serving as state deputy from 2010 to 2012. Both serve as extraordinary ministers of holy Communion, and with the pandemic, Ray also has been helping out as an altar server.

They describe it as disheartening to have not been able to attend Mass for so long but say they are pleased to be back celebrating and serving again.

Although the couple says they have a lot in common, including their love of God, they have their differences, too.  Ray is more outdoorsy and is an early bird, while Clare is a night owl, something she says works to her advantage in at least one respect.

“He makes me breakfast and coffee every morning. It’s wonderful. He’s a very good cook. He inherited that from his mother,” she says. 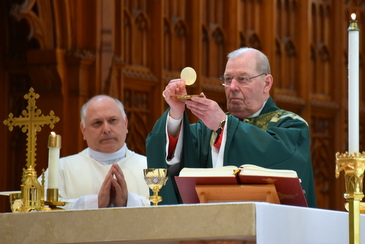 Clare says for a healthy marriage, you need to respect each other’s differences and make sure there is good communication.

“It’s just trying to understand each other and trying not to change the other person to what you would like them to be,” says Clare.

Ray points to patience and, with a laugh, adds “and different sleep schedules.”

These couples acknowledge that marriage isn’t always easy, but they say it’s important to persevere and to rely on your faith when challenges arise.

“Everyone has spats and stuff, and we can be curmudgeons at times, but it just helps out and elevates us, I guess,” says Joann.

Her advice to other couples, “Stay close to Jesus, and God, and the sacraments. The Eucharist – that is what we need.”