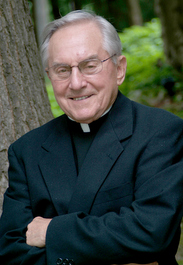 Monsignor Vincent A. Tatarczuk, who served the Lord and the people of the Diocese of Portland as a pastor, a chaplain, chancellor, vicar for religious, vicar general, and  vicar for temporalities, as well as in many other ways, passed away Friday, December 27, in Florida.

Monsignor Vincent A. Tatarczuk was born in Portland on April 12, 1925, the son of William and Anastasia (Malbach) Tatarczuk. After attending St. Dominic Grammar School and Cheverus High School, he went to Holy Cross College in Worcester, MA, and studied philosophy and theology at St. Mary's Seminary in Baltimore, MD. Bishop Daniel Feeney ordained him on June 11, 1949, at the Cathedral of the Immaculate Conception in Portland.

Monsignor Tatarczuk began his priestly ministry as chaplain of the Sisters of Mercy at St. Joseph Convent in Portland. In September 1949, he was assigned as assistant at the Cathedral of the Immaculate Conception, Portland. From 1951 to 1954, monsignor studied canon law at the Catholic University of America where he earned his doctorate.

Monsignor then served as assistant of St. Christopher Parish on Peaks Island, and on June 1, 1954, he began his long service in diocesan administration. Over the years, Monsignor Tatarczuk served as assistant to the chancellor and secretary, defender of the bond in the Tribunal, chancellor, vicar for religious, vicar general, and vicar for temporalities.  At times, he also had parish assignments simultaneous with his diocesan responsibilities. These included administrator of St. Patrick Parish, Portland, administrator of St. Louis Parish, Portland, pastor of St. John the Evangelist Parish, South Portland, and pastor of Holy Martyrs of North America Parish, Falmouth.

He was granted the honor of papal chamberlain in 1963, domestic prelate in 1967 and protonotary apostolic in 2000.

David Twomey, finance officer for the  Diocese of Portland, wrote of Msgr. Tatarczuk: “Our financial peers in other dioceses marvel at how long the Portland Diocese has had consolidated audited financial statements for the chancery, parishes, schools, cemeteries, etc. Our diocese was way ahead of most dioceses in establishing its financial practices, Diocesan Savings & Loan, pooled investment program and self-insurance programs. Monsignor was also a driving force in how we lived the Gospel in ministries such as social services, nursing home care and affordable housing for seniors.”

Despite all his accomplishments and involvements, Monsignor Tatarczuk’s first love was his Lord, the Church he served so well and his brother priests whom he esteemed greatly.

Please pray for the repose of Monsignor’s soul and for the consolation of his family, in particular, his brother Joseph, nephew Michael, and longtime caregiver Karen Metzger.

May Monsignor Tatarczuk’s soul and the soul of all the faithful departed rest in peace. Amen.